You are here:
Novica Velickovic show for Partizan’s victory over Buducnost (@ABA_League) 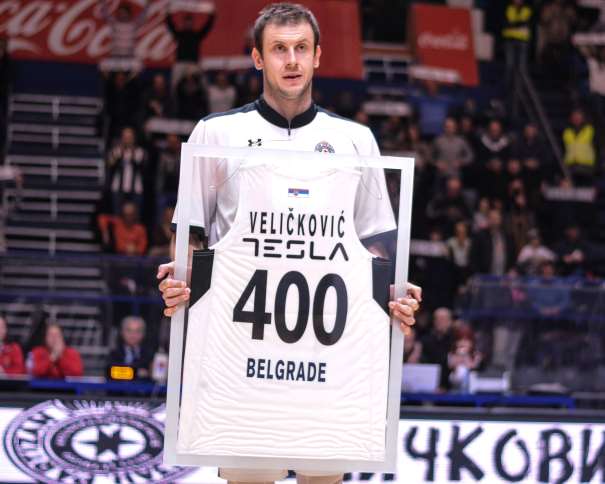 In two totally different halfs, Partizan managed to recuperate after Budućnost 18 points lead and win 94 – 83 in the match of the Round 21 of ABA League.

Before the start of the game, Partizan’s captain Novica Veličković got the gear with the number 400, because of the games he played as a member of Black and White family that he accomplished in “Radivoje Korać” Cup.

In the first half it looked like that the team from Podgorica would managed to spoil Veličković’s celebration but he, with the help of his teammates, didn’t allow Budućnost to mass with his day.

The best player on the court was no other than Partizan captain with 28 points (4/4 for three, 5/6 for two and 6/6 from free point’s line) and 5 assists. With a total index of 36 Veličković is a candidate for the player of the round award, but there are still to games left to be played. Kwame Vaugh scored 17 with 9 assists, while Bandja Sy finished the game with 14 points and 11 rebounds.

Interesting thing was that Partizan managed to score the victory against one of the best teams in the league even though two key players weren’t in the roster (Nigel Williams-Goss and Đoko Šalić), so Black and Whites didn’t have two centres and Aleksandar Aranitović had to take the role of the playmaker due to Williams-Goss absence.

In Budućnost, Nikola Ivanović was the best with 13 points, while Kyle Gibson added 12.

The beginning of the game was in the Blue and White colours because Budućnost took the lead at the start of the match. Partizan tried to stay in the game and had some chances to get close but in the second quarter guest defended the lead and the first half ended with a score 36 – 50 for the team from Podgorica.

After the first half the best scorer was Novica Veličković with 10 points, while in Budućnost the best were Justin Doellman and Aleksandar Ilić with 9 points each. 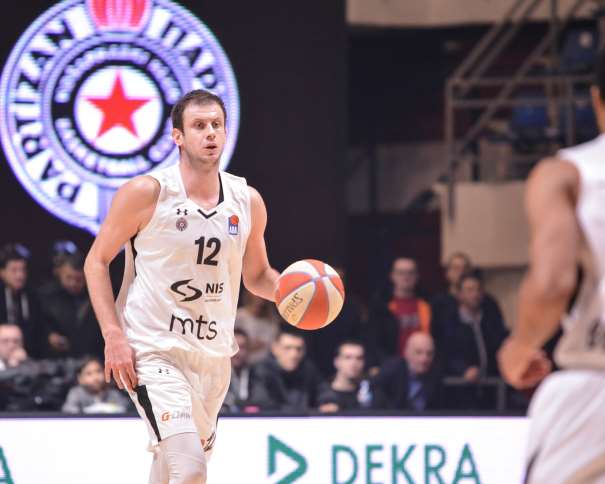 In the second half Partizan played better in every aspect of the game, so after three minutes of the third quarter result was 48 – 53 for Budućnost. It was only a matter of time when home team will made an equal game of the match and that happened after five minutes in the second half and soon after Black and Whites even took a lead (58 – 56). In that part of the game score was 67 – 65 for home team.

The last quarter started with Aleksandar Aranitović points and that announced tough fight till the very end. First double digits lead for Partizan was after five minutes of the fourth quarter when Velicković made a two points shot (83 – 72). In the end, the result was 94 – 83 for Partizan.

After the game, the head coach of Budućnost was very pleased that crowed in “Aleksandar Nikolić” Hall applauded him.

“It is a beautiful feeling. I get that Partizan’s crowd always greet their coaches. I didn’t teach them that and this is not the first time they were doing something like that. This will going to last many years that will come, it was built for a many years. I was here for a year and a half, I didn’t win anything but they recognized I did something good. Or I did something, I don’t want to evaluate myself”, said Džikić after his team lost in “Pionir”.

“I am satisfied with a first half, but not with a second. I don’t think Partizan change anything in their game, my team was playing bad in the second half. They were playing well in both half, not just in the second», said Aleksandar Džikić about the game.

Partizan coach Nenad Čanak was satisfied that his team show energy and especially with what Veličković showed on the court.

“What to say about his game, just look at the numbers. I think he will be the player of the round. I am glad that Novica still can play at the top level», said Čanak about Veličković’s game.