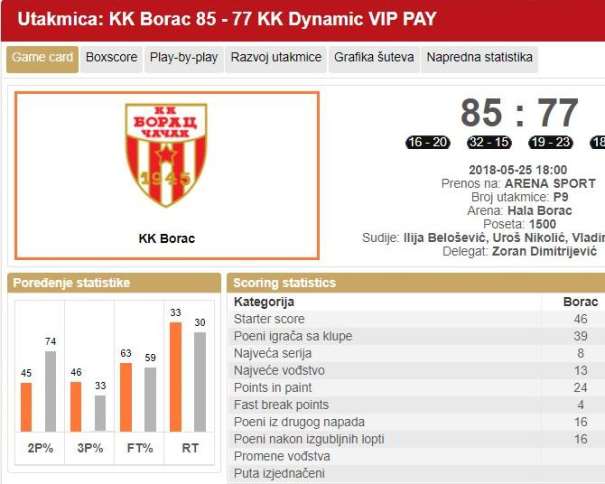 BC Borac from Čačak won in the third last game against Dynamic in the quarter-finals of the Serbian Super League and announced the semi-finals games against FMP. The final score was 85 – 77.

It is not a small thing to be in the company of the three best teams in Serbia, especially when those three are playing in the ABA League, and the team from Čačak played and will play in the ABA 2 League.

This semi-final is a great prize for all Borac did during this season, they were in the four best teams in the ABA 2 League and during this Super liga, Jovica Arsić’s squad managed to win against Crvena Zvezda and two times against Mega Bemax, the team that is also a member of the first regional league.

The team from Dorćol (part of the old Belgrade) started better in front of the crowd from Čačak, and even though no one was cheering for them they managed to keep the difference, but then Nikola Pešaković took the ball and made 7 points for the first lead of his squad (23 – 22). Soon, he got help from Miloš Dimić who made 8 points in a row. At the end of the first half, Borac’s captain, Marko Marinović, had his own show (made 3 of 3 for three pointers) and helped his team to lead by 13 (48 – 35). 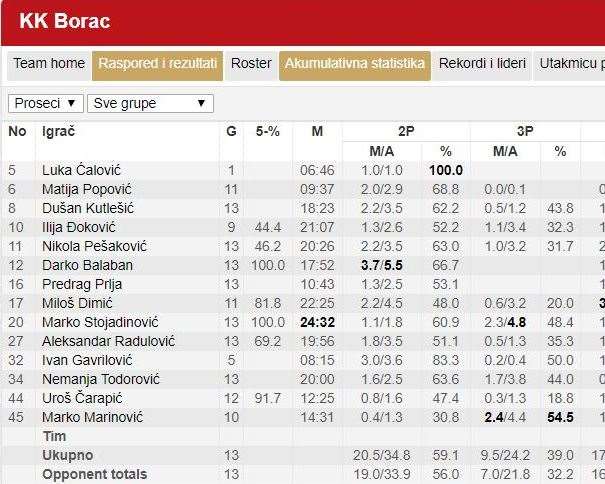 In the beginning of the second half, Miroslav Nikolić’s squad made 0 – 6 and the fight continued. Everyone knew that the guests weren’t in Čačak with a white flag. At one moment, the score was 54 – 54, but then again started Marinović’s show. The veteran from Čačak had an amazing game and pushed his team to the semi-finals.

The player of the match was Marinović with 22 points. His teammate Pešaković added 17, while Dimić finished the game with 13 points.

Andreja Stevanović had an excellent night too, but his team finished the competition in Čačak. The young guard scored 23 points. Aleksandar Todorović was the only other player with double-digits score. He added 10 points.