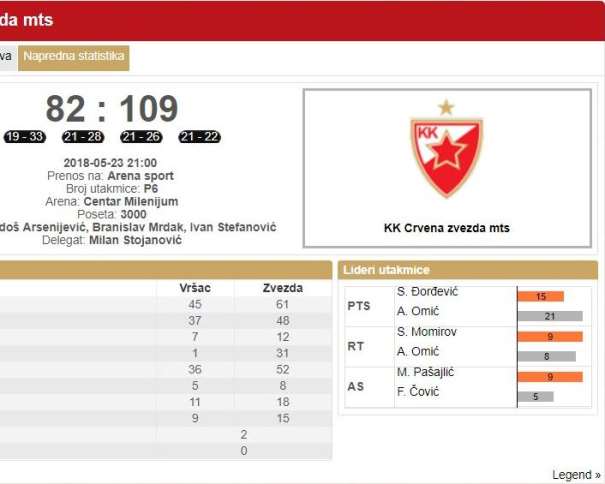 Three teams have already booked their tickets for the semi-finals, and the Black and the Red and Whites will play against each other, while FMP is still waiting for its opponent. The last game will decide if Dynamic or Borac will face the team from Zeleznik. If the team from Dorcol (part of Belgrade old Town) wins, all 4 teams will be from Belgrade, but if Borac wins, three teams will be from the Serbian capital and one from Cacak.

In the game between Zvezda and Vrsac, the best player in the winning team was Allen Omic. The Bosnian-Slovenian centre scored 21 points with 8 rebounds and 4 assists. Ognjen Dobric and Taylor Rochestie added 14 points each one, while Branko Lazic scored 12. Stefan Jankovic finished the game with 10 points.

In the team from Vrsac, 15 points were made by Stefan Djordjevic; 14, by both Stefan Momirov and Miroslav Pasajlic; and 12 were scored by Milenko Veljkovic.

The most interesting duel in the quarter-finals was between two teams from the ABA 2 League, Borac and Dynamic, due to the fact that those teams will play a third game because the score is 1 – 1. The other pairs finished their series after two matches.

Andrea Stevanovic was the hero of the match between his ex-team and his current one. The young guard scored 26 points (11 in the last three minutes of the game) with 5 rebounds. Aleksandar Todorovic and Dusan Baslac cumulatively scored as much as Stevanovic. Both players finished the game with 13 points.

In the team from Cacak, only two players had ten or more points. Aleksandar Radulovic scored 16 and Milo’s Dimic added 10. 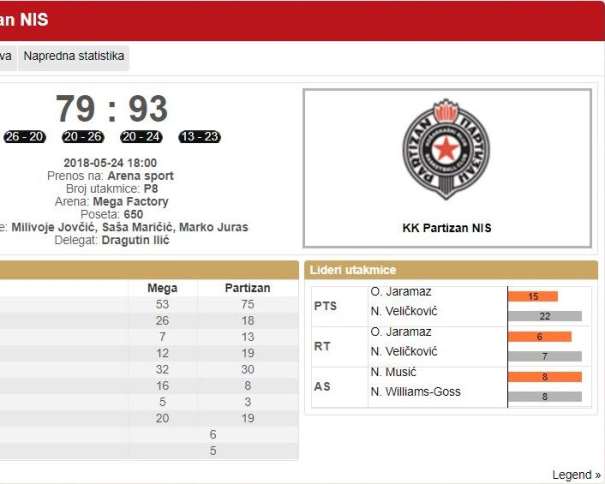 Even though everyone expected the reaction of Dejan Milojevic’s team in the second game, Partizan managed to win in both, and, in the second, thanks to the team captain, Novica Velickovic, and Nigel Williams-Goss.

The Serbian power forward scored 22 points with 7 rebounds, while the excellent American finished the match with one point less and 8 assists. Vanja Marinkovic scored 14 and Djordje Gagic, 10 points. In Mega Bemax, Ognjen Jaramaz had 15 points; Kosta Mushidi, 14; and Goga Bitadze, 12.

In the last game of the second round of the quarter-finals, FMP became the third semi-finalist by beating Zlatibor by 87 – 94. Now, the team from Zeleznik will wait and see which squad will face in the next round, Borac or Dynamic.

The second game between Zlatibor and FMP was more interesting than the first one because the team from the Serbian mountains didn’t back down in front of the team that played and will play in the ABA League.

Nemanja Nenadic from FMP, with 29 points and 6 rebounds, was, from far, the best player in his squad. His teammate Marko Jeremic added 19 points, while 13 were scored by Dragan Apic. Michael Ojo finished the game with 11 points.

Dragoslav Papic and Milan Vulic, from Zlatibor, scored 24 points each one. Radomir Marojevic added 13 and Bogdan Riznic, with 11, was the last one who had double-digits score.