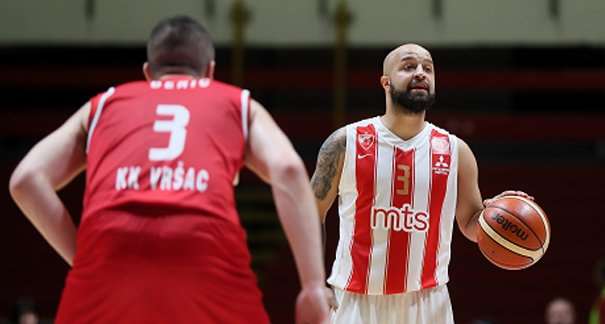 During the game between the Black and Whites and Dejan Milojević’s squad, Banja Sy from Partizan fell after a dunk and had to be transferred to the hospital.

Zvezda started furiously the first quarter of the game, and didn’t allow the team from Vršac to get back in the game at all. Almost all quarters finished with 10 or more points of difference for Milenko Topić team.

James Feldeine was the best shooter for Zvezda with 14 points, while Ognjen Dobrić finished the game with 13 points (2 of 2 for two pointers, 3 of 3 for three pointers and 5 of 5 from the free throws line) and 5 rebounds. Aleksa Radanov added 12 and Dejan Davidovac, 10 points. Taylor Rochestie had the best efficiency (20) in the Red and White team. The American guard scored 9 points with 8 assists.

In Vršac, Stefan Đorđević scored 13 and Stefan Momirov, 11 points with 10 rebounds. No one else had double-digits points in the guest team.

Borac from Čačak opened this round of Playoffs with an important win against Dynamic and now is one step closer to the semi-final. The final score was 83 – 75 and the maximal lead for Borac was 12 points and 5 for team from Dorćol (urban part of Belgrade).

Darko Balaban had an excellent game with 18 points and 10 rebounds, while Marko Marinović scored 14. Nikola Pešaković and Matija Popović added 13 each one and Dušan Kutlešić had 11 points.

In the second day of the quarter-final games, FMP and Partizan were celebrating and, again, one team scored more than 100 points. This time it was the team from Železnik, against Zlatibor. The final score was 102 – 53. It was the maximum difference in the game, 49 points, while Zlatibor newer head a leading advantage.

Radovan Đoković and Marko Jeremić scored 15 points each one in the winning team, while Nemanja Nenadić added 13 with 8 rebounds and 8 assists. Also, two players scored 12 points each one, Boriša Simanić and Stefan Pot, while Dragan Apić finished the match with 10 points.

In the last game of the first round of the quarter-finals, Partizan celebrated in front of their own crowd but the sad moment was the injury of Banja Sy, who got hurt after a dunk in the fourth quarter. He was able to get up and walk to the locker room, but soon after he had to be transferred to the hospital.

Goga Bitadze scored 17 points for Mega, while two of his teammates finished the game with 14 points each one: Ognjen Jaramaz and Luka Ašćerić.

After the game, both coaches, Dejan Milojević (from Mega) and Nenad Čanak (from Partizan), were worried about Sy. The head coach of Mega Bemax also congratulated Partizan on the win.

“I want to congratulate Partizan on this win, they deserved it. We are a young team and I know I can expect this kind of games from my players but also some excellent ones as it was the case against Zvezda. Also, I want to wish Sy that his injury is not serious and that he will get well soon. It was painful to watch and the fall looked really bad. But I hope he will be OK”, said Milojević.

The Black and Whites coach Čanak said that now is most important for Banja to get well.

“I hope it is not that serious as it looked like. It is important for him, not to play, but to feel well. We still don’t have an information about his injury but he was transferred to the ER during the game”, said Čanak after the game.