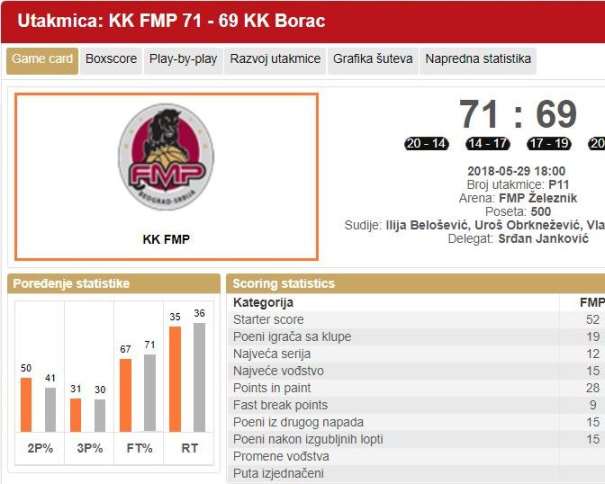 In the second semi-final game of the Sebian Super liga, FMP won 71 – 69 against Borac from Čačak, and now has a first match point.

The next game will be played in Čačak and Borac will have a 6th player because their Sports Hall will be full of supporters, especially because this semi-final is the best result in the new history of the club.

In Železnik, basketball fans was able to see an interesting match because both teams played well. FMP started more focused than their opponent and in one moment they were leading by 15, but the guests didn’t allowed the opponent to celebrate early. Borac got back in the game and even had a shot for the victory but Ilija Đoković missed the three-pointer and the host team took the first victory.

The best player on the court was Nemanja Nenadić with 22 points, 9 rebounds and 6 assists. The guard from FMP had an amazing season and the match against Borac was just the proof of his abilities. Michael Ojo added 14 for the winning team and Stefan Pot scored 11. 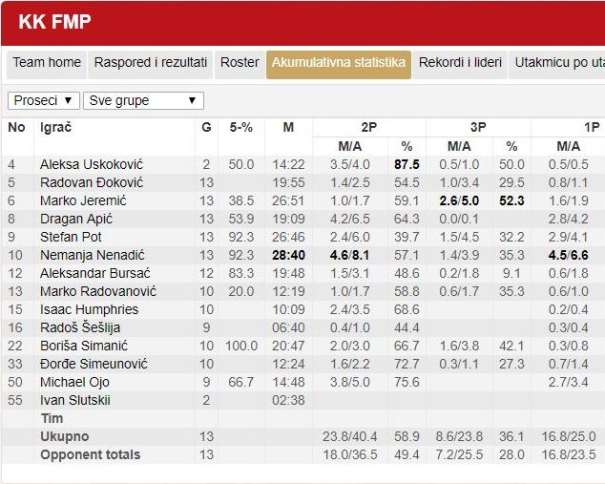 Three players in Borac also had more than 10 points, but noone as much as Nenadić from FMP. Marko Stojadinović was the best scorer in the club from Čačak with 15 points. Ilija Đoković added 14 and Darko Balaban finished the game with 12 points and 6 rebounds.

After the first games in the semi-finals, Crvena Zvezda and FMP won so now the pressure is on their opponents, Partizan and Borac, because the next games are “win or go home” moments. Especially, the Black and Whites will be pressured because they play in front of their own crowd and because the special connection between their fans and all the squad, it will be difficult for them if the Red and Whites win. The team from Čačak had an amazing season and they did an excellent game in “Super liga” so the pressure won’t be as big as for their colleagues in Partizan but the wish for continuing the season will be there without a doubt.

In the game for 5 till 8 place Dynamic was better than Zlatibor. The final score was 118 – 76 and now the team from Dorćol (old part of Belgrade) is one step closer to the spot in the next season of the ABA 2 League.