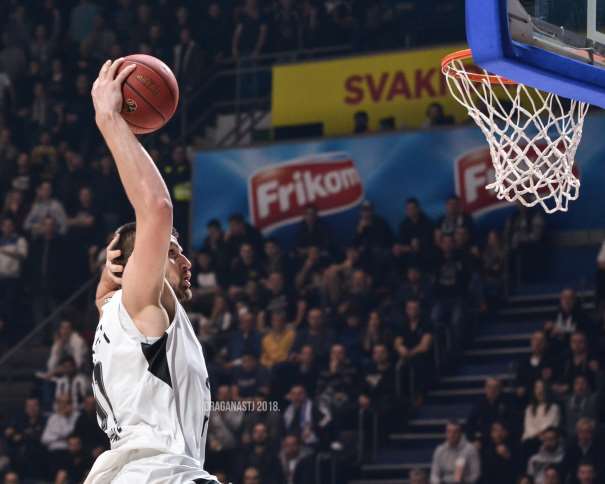 The Black and Whites (Crno-Beli) won 87 – 72 against Turk Telekom in the last round (10th) of the regular season in the EuroCup and advanced to the Top 16. The “Aleksandar Nikolić” Sports Hall was full till the last seat even though the match was played on Saints Nickolas Day, one of the biggest “slava” (Family Saint’s Day) in Serbia.

Two weeks ago, the next phase of the EuroCup was far away for Partizan, but after two important wins (the first one against ASVEL in France and in the last round against the direct opponent Turk Telekom), the Serbian squad is going to the Top 16 from the third place in the Group C.

The Opponents of Andrea Trinchieri’s squad will be Monaco (La Roca Team, Les Rouges et Blancs, The Red and Whites, the 1st team from the Group A), Berlin (Berlin Albatrosse, the 2nd from the Group B) and Rytas Vilnius (Vilniečiai, Vilnians, Black-White-Reds, the 4th squad from the group D). Partizan and these three other teams formed the Group E.

If Partizan would have lost the game against the Turkish team, Turk Telekom would have been in the Top 16, and the Black and Whites would have finished their European season, but it was vice versa scenario most due to the excellent defence of the home team. The Serbian squad played the most constant match from the beginning of the season and, due to a smart play, managed to celebrate in front of a full Pionir (aka “Aleksandar Nikolić” Sports Hall).

The best Partizan player was Rade Zagorac with 25 index rating (MVP of the game). Partizan Small forward – Shooting guard scored 18 points with 5 assists and 4 steals. His teammate Đorđe Gagić added 13 points and 9 rebounds (16 index rating), while Stefan Janković finished the match with 12 points and 4 rebounds (15 index rating) for little more than 11 minutes on the court. Marcus Page was the last player of the home team who scored double-digit (10 points, 12 index rating). 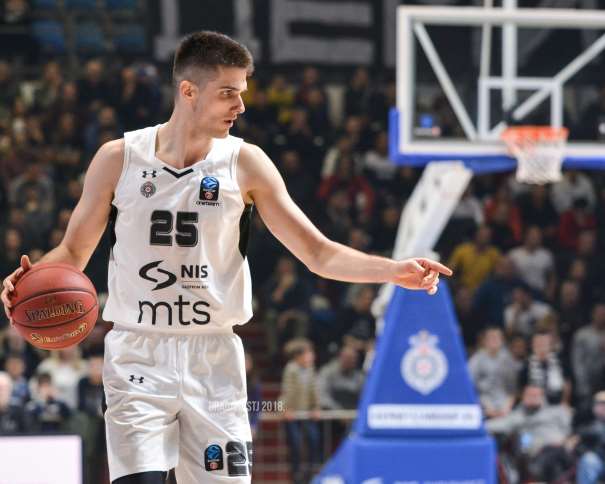 Andrea Trinchieri’s squad started the match with a 9 – 0 against Turk Telekom (first two shots for three were scored by Nikolić, while the third one was scored by Janković). The Only one who was doing something in those moments for the guests was Štimac who made their first 4 points. After those opening minutes, the team from Ankara woke up and after 6 minutes of the match the score was 15 – 13. Soon after, the guests managed to take the lead (15 – 16, 17 – 18 and 19 – 20) but it was only for a few moments because the first quarter finished with a 4 points lead (25 – 21) for the home team.

Rade Zagorac was the top scorer, with 12 points, after the first half, while Stefan Janković scored 7 points and had 2 rebounds during his 6 minutes on the court. As it was announced before the match, Štimac was the scorer number 1 for the away team (after the first 20 minutes, the Serbian center had 15 points, 6 of 6 2 pointers).

The Game continued and the Black and Whites were trying to protect the lead while the Turkish squad was attacking all the time. And in the third quarter of the match, Partizan managed to save (and advanced) their leadership. About two minutes before the end of the quarter, the home team was leading by 14 (64 – 50). Before the last quarter the score was 66 – 54 (+12) for the Serbian squad.

Besides the Black and Whites, two more teams from the ABA League advanced to the Top 16 of the EuroCup: Crvena Zvezda (Crveno-beli, from Serbia) and Cedevita (Vitamini, The Vitamins, Orange Crew, from Croatia), while Mornar (from Montenegro) had to say goodbye to Europe in his debut season. All three teams who are in the Top 16 from the regional league finished the Regular Season as the third best team in their groups.