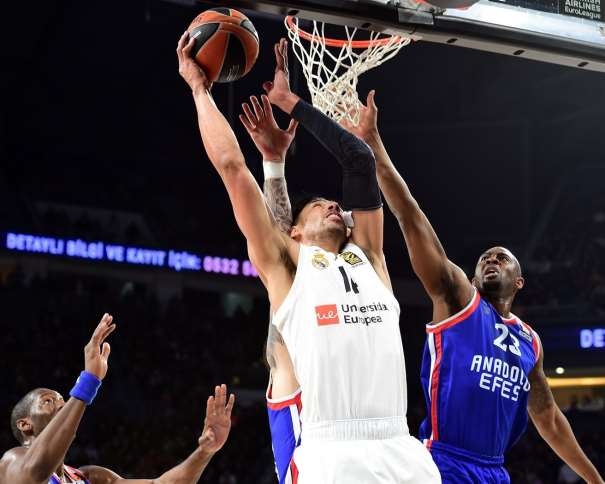 Vesely and Kalinić for the 10th win; Madrid made a comeback against Efes

Fenerbahce grabbed their 10th win in the EuroLeague by beating Panathinaikos 69 – 81 in Athens in the Round 11. While the Turkish team won in the capital city of Greece, in Istanbul Madrid was better than Efes after an amazing comeback. The Result of that game was 82 – 84. In the third game of the night Baskonia won 76 – 73 against CSKA.

Željko Obradović’s squad won their 7th consecutive game in the best European club competition, while Panathinaikos is now on a three-games losing run.

For the home team, amazing Nick Calathes 14 points and 7 assists, while two of his teammates scored 13 points each one of them: Nikos Pappas and Matt Lojeski (also added 7 rebounds to his statistics).

The Current EuroLeague champion made a comeback in the fourth quarter (8 – 24) against Efes and scored its 9th victory in the competition, while in the process they stopped the winning run of the squad from Istanbul (Efes had 5 wins in a row before the game against the ACB club).

Gustavo Ayón was, by far, the best player on the court. The Mexican center finished the game with 20 points and 11 rebounds (index rating 34). Sergio Llull ended the match with 12 points, while Trey Thompkins added 10.

In the third game of the second night of the EuroLeague Round 11, Baskonia was better than the Russian squad with a score of 76 – 73. This was the second defeat of CSKA, while the team from Vitoria-Gasteiz has 4 wins and 7 losses.

After the short break due to the national teams FIBA Basketball World Cup 2019 European Qualifiers, the ABA League continues, and in the 10th round, Partizan will face Igokea.

Till this round both teams have the same numbers of wins (4) and losses (5) in the regional league. These two teams faced each other 15 times and the Black and Whites (Crno-Beli) had 9 victories. But no game will be easy for the Andrea Trinchieri’s squad.

“We will face really unpleasant opponent – the talented team and the squad that scores more than 100 points per game. They brought new players, who are helping them to be dangers both under the basket and from distance, but we need to pay attention at our game and to try to score the goal we want against that kind of opponent. It will be a tough game, fighters’ match and if we want to win we need to be focused and be able to put same amount of energy trough all 40 minutes”, said Partizan head coach.

The Black and Whites captain, Novica Veličković, believes in victory.

“Every game in ABA League is important to us. Igokea brought some excellent players, they found their rhythm in league and now they want to continue in the same manner after this break. On the other hand, we have to play smart and tough, so the match will follow our rhythm and so we can back to Belgrade with a triumph. We have fans there and they always give us much needed strength, so I am hoping this time would be no diference. And also, I believe, due to importance of the game we will have much more fans there than before”, finished Veličković before the trip to the Republika Srpska (a part of Bosnia and Herzegovina).