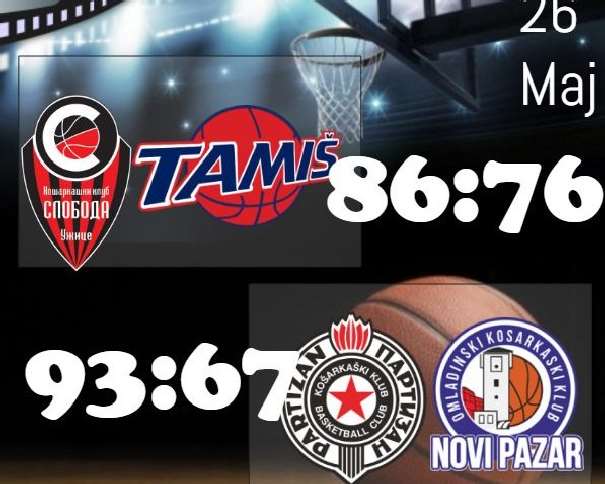 In the The Basketball League of Serbia (Serbian Superliga) Round 8, Partizan won 62 – 91, as a guest, against Dynamic in the Sports Center (SC) Master (Dynamic Sports Center) in Zemun (a municipality of the city of Belgrade, as mentioned, 4 days ago, in «Basketball League of Serbia (@KLSrbije, #KLSRB): @PartizanBC 8 – 0 (MVP)«). That was the eight victory for The Black-Whites in the national league.

After the match, at the press conference, Partizan coach Andrea Trinchieri and Partizan Power forward – Center Nikola Janković said that they were satisfied with the game.

“This was a great game from our side. We managed to play rotation, youngsters played at the high level and that is why I am satisfied”, said N. Janković after the match.

“We had correct approach. Kids helped us, but maybe they are not kids anymore. They are 18 years old. Before, you had already your three kids when you were 18. Now, when you have 18 you are still yogurt and milk. They were focused, they played smart and older players helped them to play well. Dynamic played very well in offence, with good spacing and that helped us. We responded with excellent defence”, said the Italian coach after the match.

“If you ask me what was good, my answer is nothing. And I mean from first till the last second of the game. We started soft, without any motive. Not to talk about concentration. We received 30 points in contra-attack, what to tell more. These are the problems we need to resolve as soon as possible within the team. I told the guys we need to focus on the remaining matches – against Mega bemax and Novi Pazar and to forget this game as soon as possible”, said Alilović at the press conference after the game against Partizan.

An Unbeaten Partizan is preparing for the semi-finals

In the Serbian Superliga Round 9, Partizan won 93 – 67 against Novi Pazar in the Aleksandar Nikolić Hall (also known as Pionir) in Belgrade.

This was the ninth victory for The Black-Whites and there is one more round till the semi-finals. Partizan will advance to the semi-finals as the first team from the Group B, while in the Group A, Crvena Zvezda is the best (also unbeaten). This means that there is only possible for those two “eternal” rivals to meet in the Final.

In the game against Novi Pazar, the home team started tough from the beginning and didn’t allow the opponent to seriously attack. In some moments the guests got at 10 points difference but with lots of mistakes and Partizan excellent defence couldn’t get closer.

Trinchieri allowed all his 12 available players to be on the court and all of them 12 managed to score in the match against the team from Novi Pazar.

Ognjen Jaramaz and Vanja Marinković were the top scorers on the court for The Black-Whites. Both of them finished the game with 13 points (each one of them). Vasilije Pušica and Marko Pecarski added 11 points each one of them 2 and Rade Zagorac and Alex Renfroe ended the match with 9 each one of them 2.

In the last round Partizan will host Sloboda from Užice while Novi Pazar has another away match against Dynamic in Zemun.