You are here:
Basketball League of Serbia (@KLSrbije): @kkcrvenazvezda is the Champion 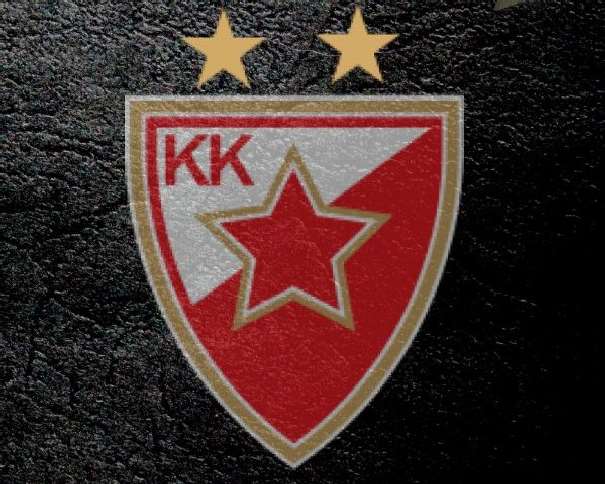 Crvena Zvezda 1 – 0 Partizan, next game in (The Black-Whites) Pionir

Crvena Zvezda won 98 – 94 (+4), against Partizan, in the first match of the Final of The Basketball League of Serbia (Serbian Superliga), in a game where the crowd was able to see that 29 three pointers were made.

From the beginning, The Red-Whites had the advantage and the participants in the “Eternal” Derby were more than motivated for the big shots. Especially if we look at the statistics of the home team. They made 7 three pointers in the first quarter in The Red-Whites Aleksandar Nikolić Hall (also known as Pionir).

Every time, in the first half, when the guests came on just 3 points behind, someone from the Milan Tomić’s squad made another three pointer. On the other side, the only one motivated in Partizan, in the first 20 minutes, was Vanja Marinković, but he couldn’t do more by himself.

In the second half, Zvezda was leading by 11, but then The Black-Whites players woke up and, at a moment, the result was 57 – 54 (+3) when Novica Veličković made a shot. But again, another three pointer, and, this time, Ognjen Dobrić was the one who scored it.

In the last 10 minutes, Zvezda was leading by 5 after a buzzer beater of Veličković in the third quarter. But, then, the key moments of the match were, definitely, two technical faults of Andrea Trinchieri and the fifth personal of Rade Zagorac, when Zvezda was leading by 3. Five free throws were made after those faults, so The Red-Whites were leading by 8.

At a moment, after Alex Renfroe’s shots, the guests were leading by 1. It was the only time when Partizan was leading because after that Dejan Davidovac and, again, Dobrić made another three pointers. And the winner was well-known after those shots.

The top scorer in Crvena Zvezda was Davidovac with 20 points. Filip Čović added 18, while Dobrić finished the match with 16. Boriša Simanić scored 14 points.

In Partizan, the top scorer was Renfroe. The American-born Bosnian naturalized player finished the game with 20 points, the Captain (Veličković) scored 17. Marcus Paige added 12 and both, Marinković and Ognjen Jaramaz, ended the match with 11 points each one of them. An Interesting fact was that Marinković scored all his points in the first half.

Home win for both teams, The Black-Whites returned the series at the beginning

In the second game of the Final of the Serbian SuperLiga between Partizan and Crvena Zvezda, The Black-Whites team won 73 – 72 (+1) in the Aleksandar Nikolić Hall, famously known as Pionir.

The hero of the match was Zagorac, with a little help of the coach Trinchieri, who made the last (and his only) three pointers for the final result.

Zagorac missed 6 times for three, but he made the last and most important one. And he is not a hero only because he made it, but because when the coach called his name for the last action, he took the responsibility no matter what happened during the match (he and Trinchieri knew what needed to be done in order to win the match, and both were confident in their decisions. And, as they mentioned after, all the other teammates trusted Rade).

Both teams started poorly the game where Pionir was all black and whites. Nor Partizan nor Zvezda could made three pointers and in the arena was too hot so those conditions were difficult for all players.

The Home team made an 8 – 0 series thanks to the great plays of Stefan and Nikola Janković. They made that difference and the result after the first 10 minutes was 17 – 9 (+8).

Nothing changed in the second quarter. Both teams were still missing and, at a moment, both, Zvezda and Partizan, had 0 / 20 for three. The Guests returned on -2, but Trinchieri’s squad defended the basket and went on +10. Paige was the one who made the first three pointer, Simanić, on the other side, returned, but Paige, again, made it. Till the end of the half, the crowd was able to see a lot of free pointers from both sides. That helped to the away squad to return, and after the first 20 minutes the score was 36 – 29 (+7) for The Black-Whites.

In the second half, The Red-Whites were playing much better, they made those shots that didn’t want to go in in the first half. Davidovac was the engine of the Tomić’s squad. He took the responsibility and helped his team to tie the score, and Billy Baron made a three pointer for the lead 38 – 41 (+3). At the end of the third quarter, Zvezda was leading by 4 (49 – 53).

But then Branko Lazić, The Red-Whites’ captain, made an unsportsmanlike fault and Partizan took its chance and tied the score. Again, the guests took the lead and at very end Partizan was five points behind. Partizan had problems with free throws, N. Janković and Paige were half successful but they get closer (Zvezda was leading by 2) two minutes before the end.

The First points in the game for Zagorac were for the tie (2 point shot), and the second ones were for the final score at about 3 seconds to the end. And, then, Baron missed the shot from a distance that was more than a half court.

On the other side, Mouhammad Faye ended the game with 14 points (index rating of 18). Davidovac added 11 points. 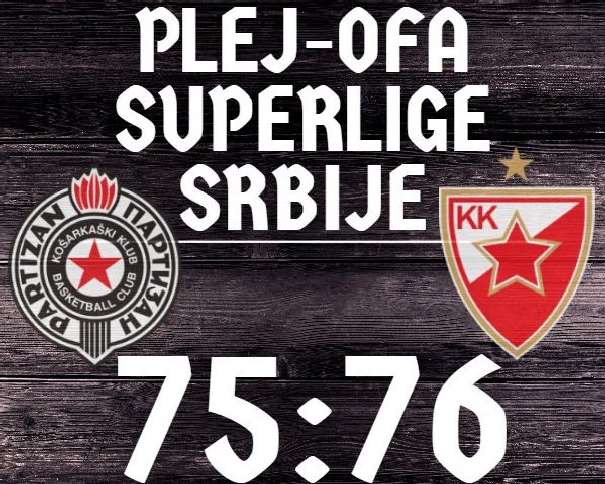 Davidovac and Baron for the second win of Crvena Zvezda

After three games of the Final, Crvena Zvezda leads 2 – 1 against Partizan. The Result of the third game in the Aleksandar Nikolić Hall was 96 – 90 (+6), mostly thanks to Baron and Davidovac.

It was a really good game if we look for attractive and diverse plays in offense so it was not strange that the score after the first 20 minutes of the game was 48 – 45 (+3) for The Red-Whites.

The Home team opened better this third match and took the lead 10 – 4 (+6), but then Marinković scored 7 points in a row. He didn’t have the help from the rest of the team, so Zvezda was leading by 4 after the first 10 minutes.

In the second quarter, Jaramaz was the one who kept Partizan alive even though the hosts were shooting excellent for three. Then, Baron woke up, but Marinković responded and with his help The Black-Whites, from -7, finished the half only 3 points behind.

In the second half, Veličković was the one who tied the result, but that didn’t last long. Zvezda responded well and after Zagorac missed the basket from a fast break, Čović made another three pointer for +6. For a few minutes, the home team was protecting the lead, but, at the end of the quarter, Jaramaz managed to score for -4.

During the last quarter, Tomić’s squad was leading by 10, but the guests managed to get back in the game. Before the last minute started, Partizan was at -2, but N. Janković made a “stupid” fault against Baron at the end of the Zvezda attack and put him on the free throw line (he had three shots and scored all three).

After those points, The Black-Whites didn’t have the strength to properly get back in the match, so, at the end, Zvezda has a match point in the fourth game.

The top scorer in the winning team was Baron with 25 points, while Davidovac added 17. In Trinchieri’s squad, Marinković had 21 (scored 4 points in the second half); Renfroe, 18; and Ognjen Jaramaz, 15.

In the fourth, and last, game of the Final in the Serbian SuperLiga, Crvena Zvezda won 75 – 76 (+1) against Partizan in the Aleksandar Nikolić Hall.

It was the last home game for The Black-Whites in Pionir and it didn’t end well because “Grobari” (Partizan’s fans) saw their favourite team lost and in what way. The winning shot was made by Baron after three steps, but the referees didn’t call travelling and also, at a moment, a thunder hit the roof of Pionir and the water was on the court. The game was paused till the problem was fixed.

For the next five seasons, Štark Arena will be the home court of Partizan, so the story between the Aleksandar Nikolić Hall and The Black-Whites is over for now. And it was a successful one, for decades it was their home where a lot of famous clubs felt the atmosphere that “Grobari” were making.

And, at the end, the “Eternal” rival took the win in front of about 6500 Partizan fans after an uncalled travelling. And it was confirmed by the league that referees made a mistake and they will be suspended for three games next season, but the trophy will stay in Zvezda hands.

From the beginning of the match it was evident that it would be difficult for both squads, but the home team was leading, after the first ten minutes, by 7 (23 – 16). At a moment in the second quarter, Partizan was leading by 14 (36 – 22), but The Red-Whites got back mostly thanks to the three pointers. At the end of the first half it was 8 (42 – 34) points difference for Trinchieri’s squad.

The Third quarter belonged to the guests and Baron, who was more than successful from the three point line. Thanks to him, Zvezda tied the result and it was obvious that the fight will continue till the end.

At the beginning of the fourth quarter, when the result was 56 – 55 (+1), a thunder hit Pionir and, because of the water on the court, the game was paused for about 30 minutes. When the game continued, Paige and Davidovac had three pointers, Partizan players made some beginner mistakes that allowed three Zvezda players the chance to make 2+1.

Half minute before the end, the guests were leading by 1 (73 – 74) and, on 13 seconds till the end, Renfroe helped Partizan lead (75 – 74). But at the end, the last attack belonged to Zvezda and Trinchieri decided his team to defend it and to make fault. It would be a smart move if referees didn’t allow travelling.