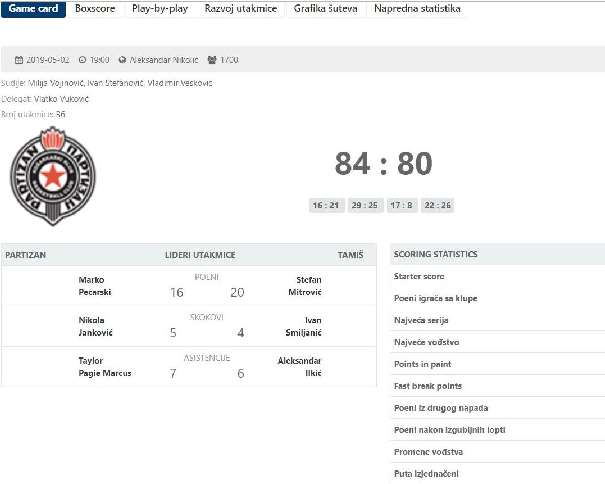 After the finish of the @ABA_League, Partizan continued its season in the domestic competition, The Basketball League of Serbia. In the first round The Black-Whites were better than Mega and in the second hosted Tamiš in the Aleksandar Nikolić Hall (also known as Pionir).

In the match against Mega, Andrea Trinchieri’s squad won 102 – 69. In the first round Tamiš also won against Dynamic with a score of 72 – 64. The team from Pančevo (a city in the autonomous province of Vojvodina, Serbia) tried to surprise Partizan.

On the other side, the team from Belgrade was going to try to continue with victories in the Serbian competition and to try to win the trophy and to finish the season with the win in the final.

In the first game, the top scorer in Partizan team was Vasilije Pušica, newcomer for The Basketball League of Serbia. He scored 22 points, while Rade Zagorac finished the match against Mega with 14 points.

Pušica signed a contract with The Black-Whites for the rest of the season with an option after the end of the season. With him in the Belgrade team has 16 players for the Serbian competition: Nikola Janković, Marcus Paige, Uroš Trifunović, Vasilije Pušica, Lazar Stefanović, Vanja Marinković, Ognjen Jaramaz, Novica Veličković, Marko Pecarski, Dušan Tanasković, Luka Tarlać, Alex Renfroe, Stefan Janković, Jock Landale, Đorđe Gagić and Aleksej Nikolić.

The Italian coach decided to give a chance to young players who can learn from the experienced teammates during the league and that way they will learn to fight for the trophy.

Before the match against Tamiš, Trinchieri said that everyone from the Serbian League wants to surprise the Serbian teams that played in the @ABA_League (Partizan, Crvena Zvezda, FMP and Mega). So, the team from Pančevo had the opportunity against The Black-Whites.

“Next game is another opportunity for us to see where we stand and for all players to show how much they are ready to use their chance to play in the best possible way. Tamiš, like all other teams that are here from Basketball League of Serbia will try to show everything they know. That is why we have to be professional and focused”, said Trinchieri before the game against Tamiš in the second round.

The Club from Belgrade managed to defend the home court against the team from Pančevo. The Guests were determined to show themselves in the best possible way. And excellent shooting percentage at the beginning of the match helped Tamiš to lead (at a moment) 10 points (6 -16), and, after the first quarter, with 5 points difference (16 – 21, as mentioned before). 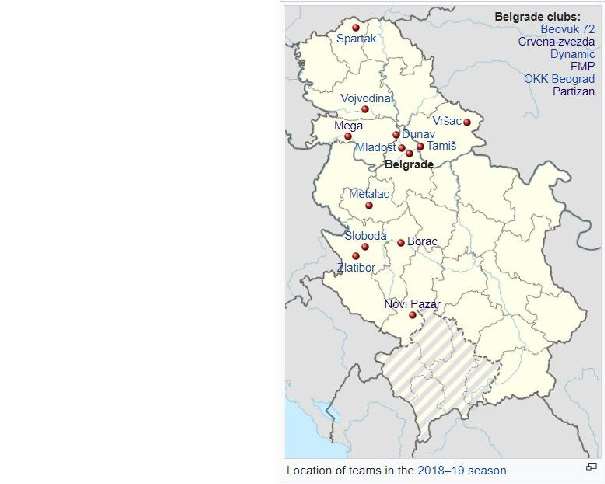 And then, Marcus Paige, with the rest of the squad, decided the match winner. The American player scored both free throw shots after an unsportsmanlike fault. In the last 10 seconds of the game, the result remained the same and Partizan managed to score the second victory in The Basketball League of Serbia.

The top scorer in Partizan team was Pecarski with 16 points, while N. Janković finished the match with 14. Jaramaz added 11 points. For Tamiš, Stefan Mitrović scored 20; Aleksandar Ilkić, 15; and Ivan Smiljanić 13.

After the match, Tamiš coach, Bojan Jovičić, was satisfied with his players approach and congratulated Partizan on the win.

“I want to congratulate Partizan on deserved victory and to wish them all the best. I wish them to get back at the place they used to be. As for my team, I am so proud of all my players because of their approach during this game. We came here to show our best basketball and we managed that. This result isn’t surprise for us. Last year we played similar match against Crvena Zvezda, and even better one against FMP, so everything what happened here was a result of a heard work from this and previous seasons. We do our scouting very careful, choosing the good players and excellent people who can adopt to our system. And we think we are doing a good job. This game also proved us right”, said Jovičić after the match.

Smiljanić said that his team showed their best basketball in Pionir.

“We came here to show our best basketball and we did it. I hope crowd enjoyed as much as we did. I am proud of all my teammates for showing how you need to play. I want to congratulated Partizan on deserved win and to wish them all the best in the rest of the season”, said Smiljanić after the game.

On the other side, Trinchieri wasn’t satisfied with the approach his players had in the game.

“I wasn’t prepared for these kind of games, so I will say what is on my mind. Playing for Partizan is an honour but also responsibility because this is the most successful team in this area and everyone wants to see something better here. Congratulate Tamiš for an excellent match, they were 10 times better than us and 50 times more focused. We, as players and coach, embarrassed ourselves. I don’t have other words. It was a shame with didn’t fulfil our duty to play for Partizan. I am very sorry for that, but as much as I am sorry I don’t have anything from that. The words are not necessary in this situation. I wish something like this never happens again, but I am not so sure. When one team that came from Basketball league of Serbia in Pionir plays better, smarter and with more quality we know we did wrong somehow. But not today. Yesterday, the day before yesterday, but we know we won’t do that tomorrow. This is a responsibility. I am not interested in the final result. I am interested in the approach, in the focus of my players. Against Mega we played well. Six days after we are catastrophic. This is immature, irresponsible and it mustn’t happen. But it did happen so now we need to see which are the most important things one coach and player should have in order to be in Partizan”, said Trinchieri after the game.

S. Janković agreed with his coach opinion and briefly said: “This kind of game can’t happen. We can’t enter into games without focus, defence. Congratulate to Tamiš, but it is well-known which squad is better. Something like this can’t happen again. We have to be much better tomorrow at the practice. Every squad will now watch this game and to approach against us with extra motive. We have to show who we are from the first second”.