In the Round 12 of the ABA League, Partizan lost 71 – 76 against Cedevita from Zagreb in the “Aleksandar Nikolić” Sports Hall. Now, the Black and Whites (Crno-Beli) have 6 wins and 6 losses while the Croatian team (Vitamini, The Vitamins, Orange Crew) is with 8 victories and 4 defeats.

The match was intense most due to Partizan fans who were throwing small objects on the court and 20 seconds before the end the referees needed to stop the game until the police emptied one part of the Hall.

From the beginning the guests took the lead, and the only time when the home team was leading was at the first quarter when the score was 14 – 10. After those moments, Cedevita took the control. The Guests rejected every attack of the Black and Whites, and the home team was trying but they didn’t use any second, or even third, opportunity after offensive rebounds during the match.

If the home team had won, the MVP of the match would, definitely, have been Jock Landale, with 12 points and 10 rebounds (23 index ratings). But the Australian’s double-double wasn’t enough for his team to celebrate. Marcus Paige was Partizan Top scorer with 14 points, while Partizan captain Novica Veličković scored 12 points. Vanja Marinković added 11 and Rade Zagorac finished the game with 10.

In Cedevita, the MVP of the game was the same one as its Top scorer, Jacob Pullen (23 index ratings and 19 points scored), followed by Andrija Stipanović with 12 points and 11 rebounds (21 index ratings). Two players scored 13 points each one of them: Justin Cobbs and the newcomer Edo Murić. The last player in Cedevita with double-digit score was Filip Krušlin who finished the game with 10 points.

Landale scored the first 6 points for the Black and Whites but the guests were leading till 9 – 10 when Partizan turned it all around. It was 14 – 10, and then the guests got back in the game again. The final result of the first quarter was 18 – 17 for the home team.

A Furious start of the second half resulted with 6 points for the home, while the away squad scored none in the first minute. And after three minutes the score was 41 – 44 for Slaven Rimac’s team. But soon, Cedevita got in the zone and finished the third quarter with 6 points difference (54 – 60). 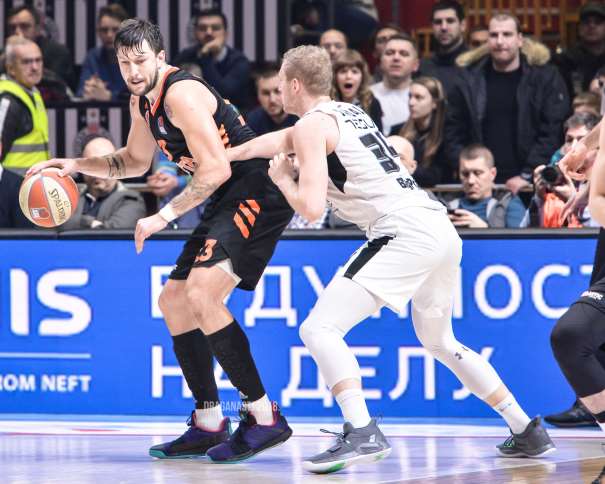 The First points in the last quarter were scored by the captain of the Black and Whites, Novica Veličković, and those were the only points for about three minutes when Zagorac made a three pointer for the score 59 – 60. And just when they got really close, the guests rejected another attack and started scoring. On 6 minutes till the end, the score was 61 – 65 for Cedevita, and after one minute they were leading by 8 (61 – 69). Twenty seconds till the end the guests were leading 68 – 74 but the referees stopped the match due to bad actions of the Partizan crowd. They were throwing small objects on the court. After 15 minutes the game was continued and Cedevita won 71 – 76.

After the match, Cedevita’s coach, Slaven Rimac, was satisfied with the win in such an atmosphere.

“My team scored such an important victory. We stopped Partizan who was in the winning streak. We knew they lost energy in the game against Turk Telekom in EuroCup and we used our chance and took control of the match. Edo Murić played great and he is with us only a week. We played very responsible, and that was not a case in the previous games«, said Rimac at the press conference after the match.

“I like this kind of atmosphere, common for our nations. One of the reasons I started play basketball was to be able to play in full hall even if something hits you in head. For all players is better to play in front of the crowd, the atmosphere gives you motive”, finished Cedevita coach his press conference.

“We played against the team who played great in the last few rounds of both competition so we knew what to expect here. We had little problems with a tall players, we allowed some shots from behind because of that, but they missed and we seize our opportunity. That tactic payed off today. Partizan played well but I think we were better this time”.

Cedevita newcomer already showed that the coach can count on him.

“The guys in Cedevita are great. They accepted me from the start. I am a big optimist and not the guy who will try to push anyone’s limits so we connected from the first practice. We have a great guys here and I hope through those wins we will become stronger and better on and off the court. It is very important for the team”, said Murić who returned for the first time in Pionir after 2016 when he wore the Black and White colours.

“I felt really strange. I wished I played like this against Zvezda, but I am a professional. I would give anything for the team even if my brother (Dino Murić) is on the other side, and I love my brother a lot, but as I mentioned, I am a professional. Whenever I played against him I wanted to win, and against Partizan is no difference. I’m glad I played well and that we won because it was an important win for us. We lost the first game against Partizan in Zagreb and we were trying to win with bigger difference and we accomplished our goal”, said Murić who knows that Cedevita always have big goals in the regional league.