You are here:
Serbia without Nedovic and Kalinic at #EuroBasket2017 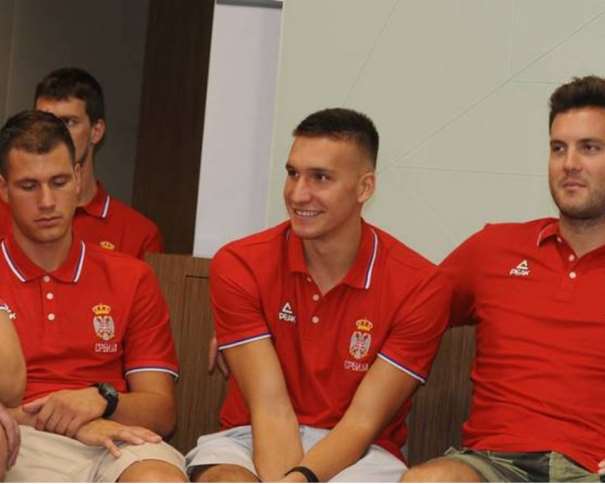 Serbia without Nedovic and Kalinic at #EuroBasket2017

Head coach of Serbian national team announced 12 players who will go to Turkey for upcoming EuroBasket and Nemanja Nedovic and Nikola Kalinic won’t be part of the team.

All these players who will travel to Turkey were playing the last game of the Acropolis International Basketball Tournament against host Greece and won 67 – 69.

Both teams were highly motivated, also Greeks have 6th player, the crowd in OAKA basketball arena, and for sure, every player likes to play in that atmosphere.

Also, one good thing for Aleksandar Djordjevic’s team was that Red Star’s new captain Branko Lazic was able to play, so his injury wasn’t that serious, and he will travel with the team but Kalinic has really serious problem with his back and Nedovic wasn’t practicing for a while so Djordjevic think that both players won’t be able to help the team.

Serbia ended first half leading by 3 points (35 – 38) and the leading scorer was Dragan Milosavljevic with 10 points, Ognjen Kuzmic scored 9. For Hellas, two players had 8 points: Nick Calathes and Ioannis Bourousis.

In the first quarter of the second half both teams were playing good defense so in offense they missed some shoots, and that quarter ended with score 44 – 54 for Serbian team. One minute before the end of the game the score was 67 – 69 and whole Arena was cheering. Greece missed opportunity to score even though they had 2 offensive jumps in one attack. And 22 seconds until the end Thanasis Antetokounmpo missed two free throws, so Serbia was still leading 2 points and Hellas missed two more shoots they had so the final score was 67 – 69.

After the match in Athens Djordjevic said that he had tough decision to make because of all those injured players: “The tournament in Greece was very tough, 3 games in 3 days. If I knew at the beginning that we won’t have 16 players able to play I wouldn’t say yes to this tournament. Players who played are tired but we will rest and have light practices before Turkey”, said head coach of the Serbian team who thinks that all players who practiced in preparation process deserved to play for the national team.

“We have 12 players who will play for the team and who are eager to win and they will fight like men. They all deserved to be here and even though we had issue with injuries and that some key players from last tournament aren’t playing the goal is the same – to win medal”, said Aleksandar Djordjevic.

Serbian team is maybe the team with most players cancelations because of the injuries. Players who won’t play for “Eagles” are Marko Simonovic, Milos Teodosic, Miroslav Raduljica, Nikola Kalinic and Nemanja Nedovic. Before those players Nemanja Bjelica had to say no due to injury and he wasn’t all summer with national team and Nikola Jokic said no due to preparations for new season in NBA.

But team Serbia still has one strong squad and first step at EuroBasket will be to pass the Group Phase. They are playing in Group D with host Turkey, Latvia, Russia, Belgium and Great Britain.