You are here:
Trinchieri: “Now you got the answer why I am here” (@PartizanBC, @EuroCup)

Trinchieri: “Now you got the answer why I am here” (@PartizanBC, @EuroCup)

In the Round 6 of the EuroCup, Partizan scored its 2nd win by beating Trento with a score of 76 – 71 in the “Aleksandar Nikolić” Sports Hall.

It was a difficult game from the beginning and till the very end the winner was unknown even though the Black and Whites were leading all the time.

After the win, at the press conference, Partizan head coach, Andrea Trinchieri, said that he will remember this game forever.

“It looked bad but the feeling was amazing. That simple… I think we saw whole season in the 40 minutes. We saw an excellent team play, we saw an immature group of young players, who found a way to lead again by 15 points, and then we again saw the group of kids”, said Trinchieri at the very start of the press conference.

The Italian coach said that playing with young guys will always be like in the game against Trento.

“We had never made four, five, six, seven steps in one direction. When we made one step ahead we went one step behind or side-step. That happens. We have to be better when talking about mentality and concentration”, Partizan head coach emphasised and added that he was satisfied with the crowd in the “Aleksandar Nikolić” Sports Hall (aka Pionir).

“When I came here seven day ago, everyone asked ‘why’. Look around and you will get the answer. This is why. I am little bit sentimental and these things get to me. I got an important massage tonight and it sounded: ‘Get ready for Pionir’. It was amazing, unforgettable. I would like to experience same thing over and over again” was satisfied the Italian coach and then said one more thing about the game.

“I didn’t like one more thing. We managed with lousy concentration to put this crowd to sleep. That the world record. That was the thing that piss me off a lot, but you can’t be too hard with young squad. We lost in Trento, now we won. We could won with 20 points difference and we could easily lose the game. Without a jump in the last few 20 second of the match the story would be different”.

The Black and Whites should look ahead and concentrate on many more upcoming games in this season. 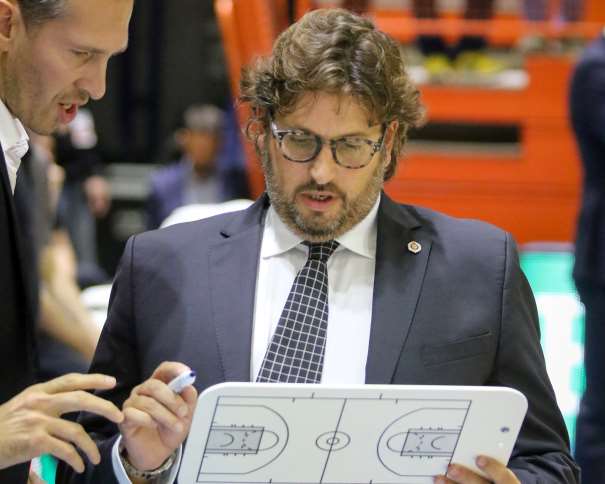 “Let’s move on. Up, down, good, bad… Let’s go little more in this direction. We will need time, I hate myself when saying this, but there is no other way. I am not Harry Potter, Don’t have magic wand. I managed to change something in this team, but not lot. The thing I managed to implement is philosophy of work and philosophy of the game. I asked my team to play for the crowd, to play defense, contra attack and not to think a lot. When we think, we play lousy, we are slow and predictable”, said Trinchieri.

The New head coach of the Serbian team said that he didn’t like the fact about not playing as a team, and his players were acting as individuals in some moments.

“They forgot my word, maybe it was due to lack of experience. Sometimes you have to wait for your turn. On the ball isn’t written the name of any player, it is the name of Partizan BC. We play on the open one. This guy needs to make a shot. In one moments, players we scoring for their own statistics and I don’t like that at all. I managed to see improvements in lot of energy they were showing and in defense but I didn’t managed all”, the coach was honest.

In one moment Partizan was playing with 4 tall players in order to surprise their opponent and they did it.

“We won the game using four tall players. I follow the game and I react according to things I see. When we played with small players we were good in offence but bad in defence. Then we played with tall players. Bandja (Sy) was the key factor, because he has tall legs and he is fast. And Zagorac (Rade) was acting as a guard. In the beginning of the last quarter our game looked amazing, while we were playing defence and then… we made some stupid decisions. I will always try to find what we need, but I would also like them to find it«, said Trinchieri who finished the conference by mentioning the game against Cibona.

“We are hosting Cibona this Saturday, and my goal is to get the third win in raw. That would be a world record with this team and we will only work on it”.

One of the heroes of the win against the Italian squad, Rade Zagorac, was emphasising the importance of the first quarter in the game.

“I want to emphasise good thing, and that was the first quarter. I don’t want to say that it has to be normal to win every part of the game with 15 points difference but we made some stupid mistakes, we allowed some things we shouldn’t”, said Partizan forward after the win and added that it was a good feeling to get back on the winning track.

“Good win for us, after bad series. Second win in raw after 6 loses in raw. We could do much better, it is sufficient to say that after victory but it is the truth. Some things have to look different. We will lock ourselves in the gym and work on some improvements, on details. We are still getting to know our coach, his requests. The solution is to get to work” said Rade Zagorac.